Moscow, being the capital of the largest country on the planet, is supposed to be something impres 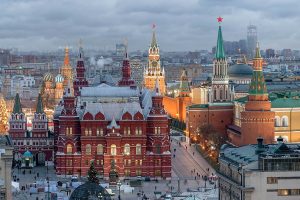 sive and it really is. It’s an eclectic city full of raw and chaotic energy, concentrating 80% of the country’s money and 10% of its population. What really gives Moscow its charm is that it is full of contrasts, from the ornately decorated boutique shops sitting next to Soviet style apartment blocks to the young and carefree hipsters mingling with the more rugged older generation. Moscow is home to some of the most photographed sites in the world including Red Square and the Kremlin. Once you have seen this more touristy side of the city, it is easy to keep yourself busy with the ever growing number of galleries, museums and restaurants. The more time you spend there the more you become familiar with the dynamic of the city and become aware of more local venues giving you a taste of the real Moscow off the beaten track. We have heard from friends that the nightlife in Moscow gives the likes of Vegas a run for its money!