Taipei is a fast paced and fun city to both explore and live in! Extremely friendly and with a cultu 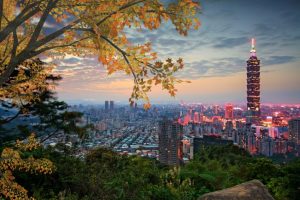 ral blend stemming from both Japanese and American influence this city is like no other in Asia, making it a very dynamic and exciting place to live.

From the Taipei 101 tower to its ancient Taoist temples, Taipei is proud of its ancient heritage as well as its modern wealth. The city is famed for its many night markets and amazing street food scene. It is not unheard of for both families and singles to eat out every night rather than slave away in the kitchen! Taipei is a clean and forward-thinking city and very safe even by East Asian standards. The metro system is very well run and affordable making it very easy to get around. The people of Taiwan pride themselves in being independent and a little quirky which is very quickly noticed on your travels around the city! Taipei is such a fun city to live in, the cost of living is low, but salaries are high making saving potential great.

The mountains surrounding Taipei offer a quick and scenic get-away, and the rest of Taiwan and its surrounding islands are well worth exploring for their unspoilt countryside and amazing beaches and are very easy to get to from Taipei.

We would easily recommend Taiwan to both families and single teachers, the international schools are excellent as are the salaries and packages in general.